BC FORUM members in action at union and community events

BC FORUM encourages members to take action on issues of importance - then let us know what you’ve done! Letters to the Editor, articles you have had published or any media you may have been involved with - send us a link or a copy of what you’ve done and we will list them here!

November, 2019 - BC FORUM supports continuation and extension of
BC Hydro Customer Crisis Fund

September, 2019 - BC FORUM submits letter to the Office of the
Superintendent of Financial Institutions. 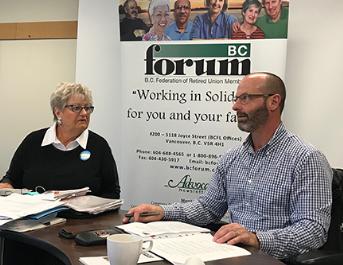 September, 2019 - From left, Diane Wood, president BC FORUM with Laird Cronk, president of the BC Federation of Labour and Chair of BC FORUM are shown presenting to the BC FORUM Board meeting Sept. 17th. Photo taken by Theresa Couture. 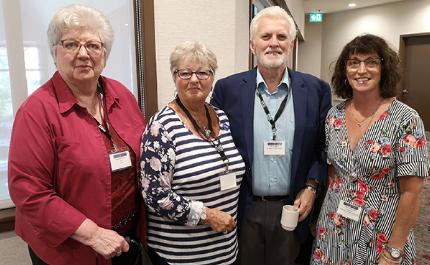 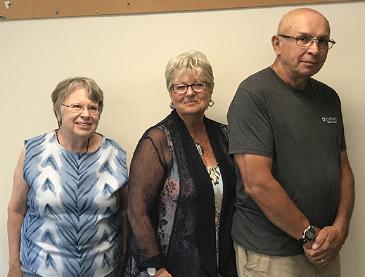 July, 2019 - Acclaimed at the July 2019 Board meeting to serve another two-year term on the BC FORUM Executive Board are, from left, Miriam Olney, Secretary; Diane Wood, President; and, Gord Savard, 2nd Vice-President.

June, 2019 - Write to your MP today to implement a national pharmacare policy. 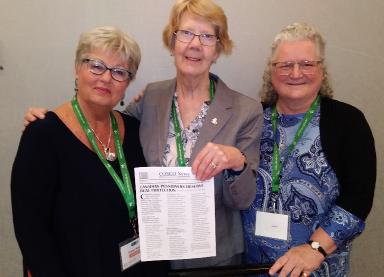 May, 2019 - Attending as delegates at the 2019 BC Summit for Older Adults on Safe Medication Use, from left: Diane Wood, President BC FORUM & General Vice-President of the Council of Senior Citizens Organizations of BC (COSCOBC); Barb Mikulec, General Vice-President COSCOBC and former Board member of BC FORUM; and, Agnes Jackman, Member-at-Large COSCOBC and Regional Representative BC FORUM.
Photo taken by Ron Richings.

Seek to have dietitian services included in your health benefit plan! 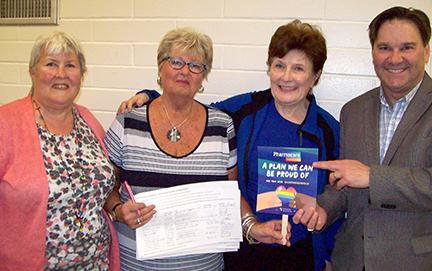 Federal NDP MP Don Davies (Vancouver Kingsway) made a presentation at the Council of Senior Citizen Organizations of BC Delegates meeting on May 10th and is shown here with COSCO Executive members Leslie Gaudette, Diane Wood (President of BC FORUM) and Kathleen Jamieson. Diane is holding the MP Davies’ petition supporting the creation of a Universal Dental Plan with signatures collected at the meeting. Information was also shared with the CLC’s brochure “Pharmacare: A Plan We Can Be Proud Of”.
Photo taken by Denis Ottewell. 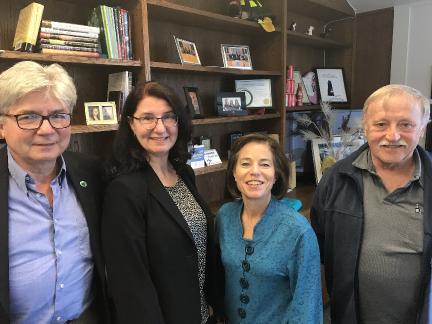 BC FORUM participated in the BC Federation of Labour lobby event at the Legislature in Victoria supporting improvements to BC’s Employment Standards Act and Labour Code with a visit to Hon. Selina Robinson, Minister of Municipal Affairs and Housing, MLA Coquitlam-Maillardville. From left are: Steve Crozier, president New Westminster & District Labour Council; Janet Andrews, secretary-treasurer, NWDLC; Hon. Selina Robinson; and, Gerry Townsend, BC FORUM Regional Representative. Thank you to Matt Djonlic, Executive Assistant to Minister Robinson for taking the photo. 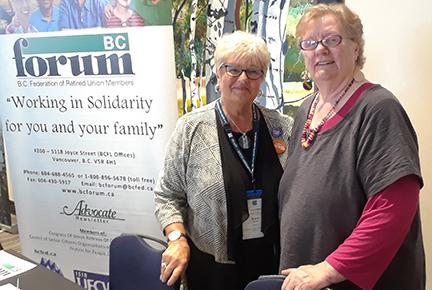 At BC FORUM booth with Gudrun Langolf, President, Council of Senior Citizen Organizations of BC (COSCO) at Health Sciences Association (HSA) convention April 4. 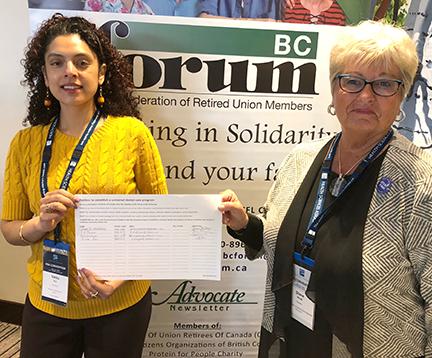 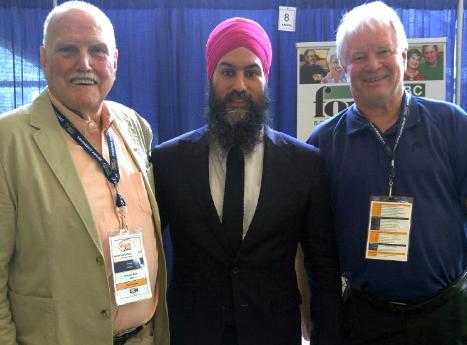 At the BC FORUM booth at the United Steelworkers 54th Annual National Policy Conference in Vancouver BC in April, Board Members Fred Girling and Bill Silvester had a visit from Jagmeet Singh, Leader of the Federal NDP and recently elected MP for Burnaby South. 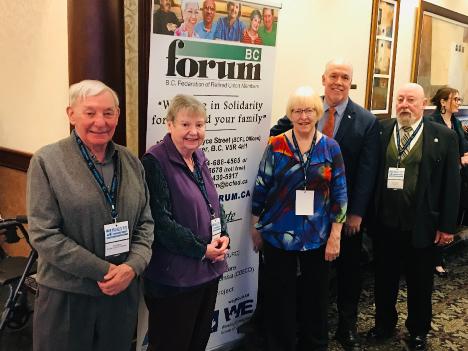 Premier John Horgan joined with BC FORUM for a photo opportunity at the Building Trades Convention in Victoria in early March. From left are Phil Bailey, Betty McKnight, Anne Bailey, Premier Horgan, Russ St. Eloi (BC FORUM Board member).

This e-petition to the Government of Canada is open until April 9, 2019. 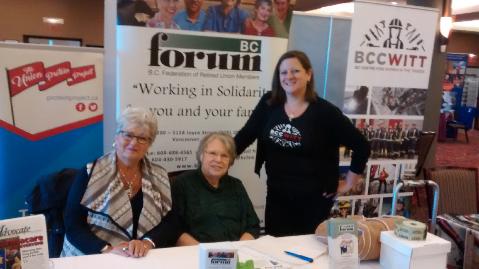 From left are Diane Wood, BC FORUM President, Miriam Olney, BC FORUM Board Secretary and Sussanne Skidmore, BC Federation of Labour Secretary-Treasurer, at the
CLC Winter School Trade Fair at Harrison Hot Springs, January 2019. 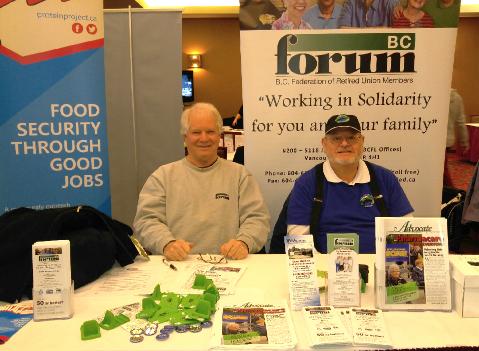 BC FORUM booth at the CLC Winter School, January/19, at Harrison Hot Springs; from left are Bill Silvester, BC FORUM Board member and John Hooker, BC FORUM Regional Rep. and New Westminster & District Labour Council delegate.